Sonora Dodd, Allen G. Leslie, and another person with flag 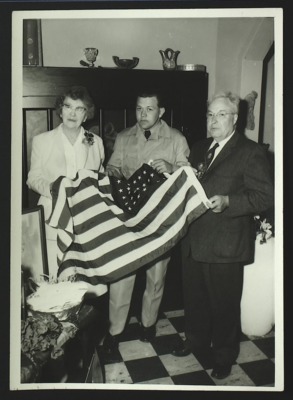 Photograph of Sonora Dodd, Allen G. Leslie, and another man, holding an American flag. For more information see newspaper clipping from the Spokane Daily Chronicle, Spokane, Washington, June 13, 1960, which stated: "Mrs. John Bruce Dodd, Spokane wom[a]n who founded Father's day 50 years ago, was honored by the USO yesterday. Airman 3/c Allen G. Leslie of Hopewell, Va., who is stationed at Geiger air force base, presented Mrs. Dodd with a cake in behalf of the USO. The cake is in the form of an old-fashioned straw hat, symbolic of those worn in 1910 when Father's day began. The day will be observed next Sunday, June 19."