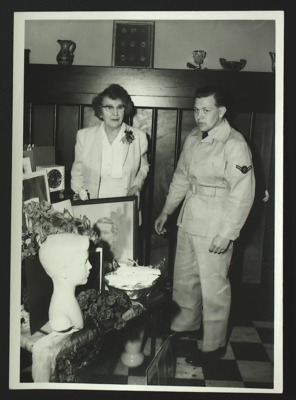 Photograph of Sonora Dodd with Allen G. Leslie. For more information see newspaper clipping from the Spokane Daily Chronicle, Spokane, Washington, June 13, 1960, which stated: "Mrs. John Bruce Dodd, Spokane wom[a]n who founded Father's day 50 years ago, was honored by the USO yesterday. Airman 3/c Allen G. Leslie of Hopewell, Va., who is stationed at Geiger air force base, presented Mrs. Dodd with a cake in behalf of the USO. The cake is in the form of an old-fashioned straw hat, symbolic of those worn in 1910 when Father's day began. The day will be observed next Sunday, June 19."