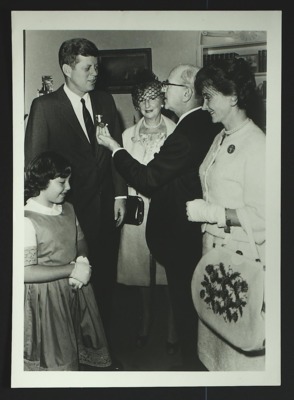 Photograph caption: "President Kennedy being named 1963 'Father of the Year' and receiving his medal from Alvin Austin, Chairman, National Father's Day Committee, at the White House on May 29th. Left to right: Laurie Mufson, The President, Mrs. Austin, Mr. Austin, Mrs. Maxwell Kaufer, members of Mr. Austin's family. Here is the President's invitation to the Committee: 'I most appreciate the honor you have given me. I would like to personally thank your committee. Would it be possible for them to visit me at the White House on May 29th and make the presentation of the medal at that time. We look forward to welcoming you. With deep appreciation. John F. Kennedy.' The Committee later stated, 'This year witnessed the most extensive Father's Day observ-ance and interest.'"