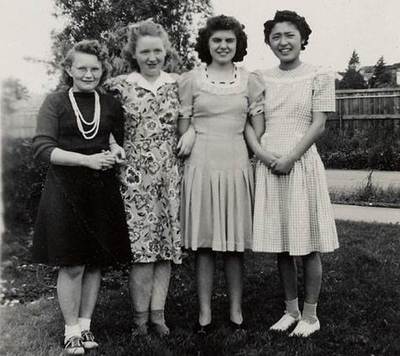 Pictured above is a farewell party for a Nisei girl whose family would soon be leaving the West Coast.

After the Pearl Harbor attack, people of Japanese ancestry were seen as potential traitors and threats to military security. On February 19, 1942, President Roosevelt signed Executive Order 9066, which targeted the Japanese by requiring them to leave their homes, businesses and possessions on the west coast and move inland. Although the U.S. was also at war with Germany and Italy, German Americans and Italian Americans on the west coast were not required to move.

The exclusion and internment of people of Japanese ancestry was accepted because it seemed vital to national security. Because the U.S. feared an attack on the west coast, it was only Japanese living on the coast who were targeted for internment. Those who lived far enough inland were allowed to stay in their homes; they were not considered a high security risk. Washington State was divided into three military zones. The Columbia River was the dividing line between the two zones which people of Japanese ancestry had to leave and the zone where they were allowed to remain.