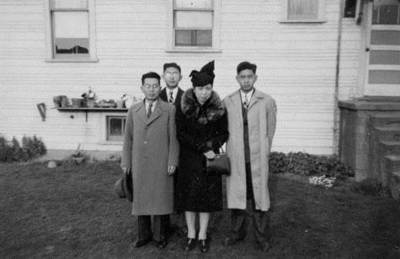 Pictured above is a Japanese family in front of their home in Seattle before they voluntarily relocated to Spokane.

Because they had only a few days to move, Japanese families sold their businesses, homes, and belongings for any price offered. Most people only received a fraction of what their possessions were worth, and left behind family heirlooms that were lost forever. Some people were fortunate to have good neighbors who helped them move or store their belongings.

Some Japanese had relatives living inland who were able to offer their homes as refuge. Some young Nisei also voluntarily evacuated on their own without their families and without any promise of safety in the places they moved to.