Starting Over in the Inland Empire 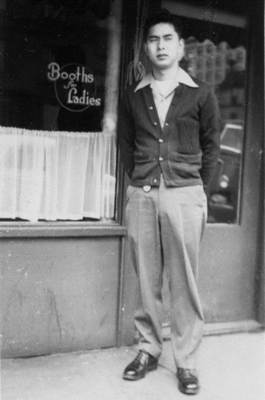 People of Japanese ancestry who relocated to the Inland Empire began their lives again with virtually nothing. Even inland, they continued to face discrimination and prejudice.

Issei parents started over in the Inland Empire by opening businesses, such as hotels and restaurants, in towns like Spokane. For many Spokane citizens and city officials, the influx of Japanese into Spokane was alarming. In 1943 the city council received a petition protesting the leasing of property in downtown Spokane to people of Japanese ancestry. The petition contained 249 signatures from Spokane citizens.

Matson’s Café, pictured above, was operated by a Japanese family who voluntarily evacuated to Spokane. It became a popular hang out for the African American service men stationed at Geiger Field and Fort George Wright near Spokane and Farragut Naval Base in Idaho. These men, too, were on the margins of the predominantly Caucasian population of the Inland Empire.